One only sees what one looks for, one only looks for what one knows.

Modern medicine has divided us, human beings, into different systems and areas: cardio-vascular system, digestive syste, nervous system, etc. According to this division different medical specialties have been created, each concentrating on a particular bit of the human body: cardiology, gastro-enterology, gynaecology, neurology, psychiatry etc., etc. There is a reason for that. Medical science over the years has accumulated an enormous amount of knowledge. No doctor in the world can possibly know it all in detail, so specializing allows doctors to concentrate on a particular area of knowledge, to learn it thoroughly and to become an expert in that area.

However, from the early years of this specialization many doctors have recognized a problem developing. A specialist in a particular area tends to pay attention to the organs which he or she knows best, ignoring the rest of the body. The fact that every organ in the body exists and works in contact with the rest gets forgotten. The body lives and functions as a whole, where every system, organ, tissue and even cell depend on each other, affect each other and communicate with each other. One should not look at, let alone treat, any organ without taking the rest of the body into account.

One area of medicine is particularly prone to look at its organ separately from the rest of the body. That area is psychiatry. Mental problems are examined from all sorts of angles: genetics, childhood experiences, and psychological influences. The last thing that would be considered is looking at the patient’s digestive system. Modern psychiatry just does not do that. And yet medical history has plenty of examples where severe psychiatric conditions were cured by simply “cleaning out” the patient’s gut.

The vast majority of psychiatric patients suffer from digestive problems, which are largely ignored by their doctors. The gut-brain connection is something which, for some reason, many modern doctors do not understand. As they give out millions of prescriptions for antidepressants, sleeping pills and other drugs, which the patients have to place into their digestive systems in order to affect their brains, they still fail to see the connection between the digestive system and the brain.

The usual broad spectrum antibiotics kill a lot of different microbes in the body – the bad and the good. But they have no effect on Candida. So, after every course of antibiotics Candida is left without anything to control it, so it grows and thrives. At the dawn of the antibiotic era the medical profession recognised this phenomenon, so it used to prescribe Nystatin (an anti-candida antibiotic) every time a broad-spectrum antibiotic was administered. However, for whatever reason, doctors stopped this practice decades ago, and now we are paying the price for it – candida infection has become extremely common. Apart from antibiotics, another factor in our modern world plays a major role in Candida overgroth – our diet. Candida flourishes on sugar and processed carbohydrates and these are the foods which nowadays dominate our Western eating habits.

Some opportunists, listed above, when out of control, get through the gut wall barrier into the lymph and bloodstream and cause problems in various organs in the body. Bur of course, the first place to suffer will be the digestive system.

Certain opportunists, when not controlled by good bacteria, get access to the gut wall and damage its integrity, making it “leaky”. For example, microbiologist have observed how common opportunistic gut bacteria from the families Spirochaetaceae and Spirillaceae have an ability, due to their spiral shape, to push apart intestinal cells, breaking down the integrity of the intestinal wall and allowing through substances which normally should not get through. Candida albicans has this ability as well. Its cells attach themselves to the gut lining, literally putting ‘roots’ through it and making it ‘leaky’. Partially digested foods get through this leaky gut wall into the blood stream, where the immune system recognises them as foreign and attacks them. This is how food allergies or intolerances develop.

A few shots of the river from the walking path near our apartment. These were taken in 2007. There’s been so much development since then. I’ll have to do another post on before and current pictures of this area.

fishing in the river

This is a staple soup in Korea. It’s very nutritious.

Criticism of the regime or the leadership in North Korea, if reported, is enough to make you and your family ‘disappear’ from society and end up in a political prison camp. It goes without saying that there is no free media inside the country. The only opinion allowed to be voiced inside the country is the regime’s.

Another one of Korea’s favorite snack foods. Spicy ‘rice cake’. 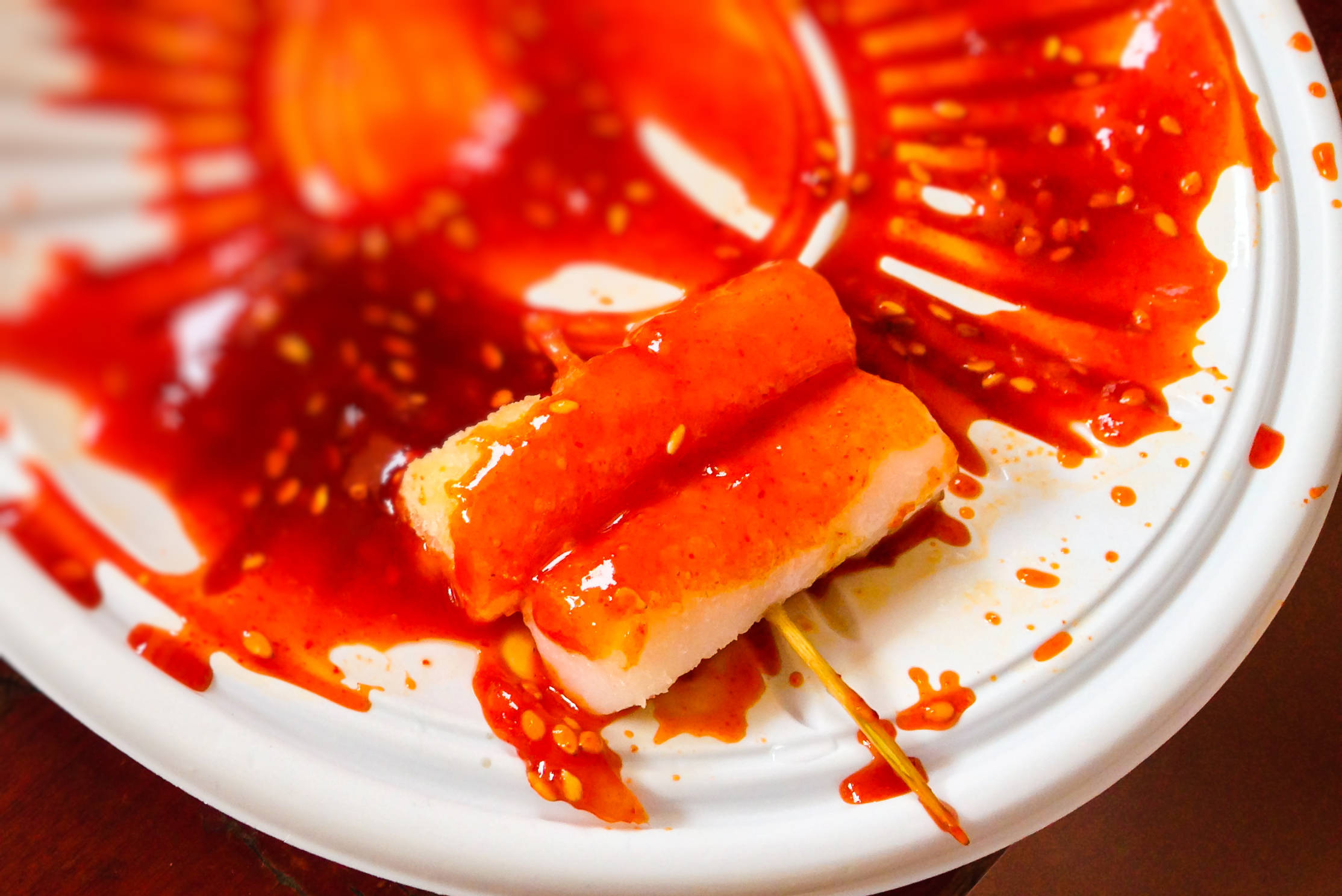 One of the most exciting activities in the Korean exchange program is the cooking activity. I feel so excited to learn how to cook Korean foods and enjoy them to the utmost. The first food we cooked together was 떡꼬치 TTeokkochi (Spicy Fried Korean Rice Cake Sticks).

One of Korea’s most convenient foods is kim bap, which literally means seaweed wrapped rice. There are many types, but my favorite, apparently most liked by foreigners, is the Nude Kimbap. It’s wrapped with the rice outside, so it has rice instead of seaweed on the outside. Yum! Mainstay ingredients are yellow pickled radish, ham, carrot, egg and sometimes spinach. I like tuna kimbap too. It’s all good:-) 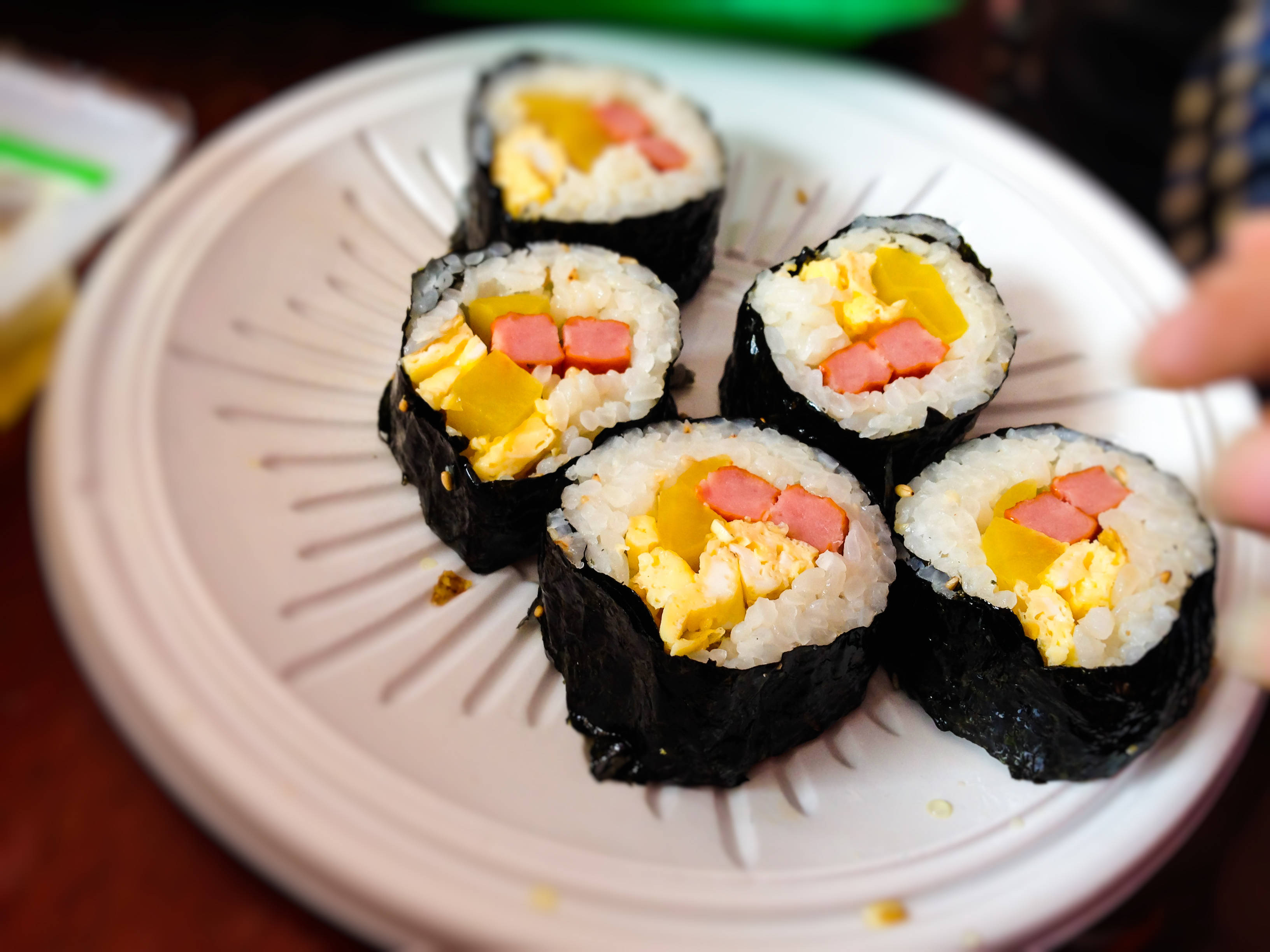 1945: The Division of the Korean People

Following Japan’s defeat in 1945 the Soviet Union and United States agreed to split the post-war control of the Korean peninsula between themselves. On August 10, 1945 two young U.S. military officers drew up a line demarcating the U.S. and Soviet occupation zones at the 38th parallel. The divide should have been temporary, a mere footnote in Korea’s long history, but the emergence of the Cold War made this a seminal event. Seeking to ensure the maintenance of their respective influences in Korea, the U.S. and USSR installed leaders sympathetic to their own cause, while mistrust on both sides prevented cooperation on elections that were supposed to choose a leader for the entire peninsula. The United States handed control over the southern half of the peninsula to Syngman Rhee, while the Soviet Union gave Kim Il-sung power over the north. In 1948, both sides claimed to be the legitimate government and representative of the entire Korean people.

Syngman Rhee declares the formation of the Republic of Korea in Seoul, claiming jurisdiction over all of Korea..

Kim Il-sung declares the formation of the Democratic People’s Republic of Korea in Pyongyang, also claiming jurisdiction over all of Korea.

The Flow of Stardust ...